The University of Texas at El Paso and the National Association of Hispanic Journalists launched a survey to measure job satisfaction of Latino journalists on Thursday.

The survey will ask participants about current working conditions and prospects for career advancement. This is the third time a project like this will be conducted, but this time around, seven UTEP student researchers will be hired to help. By doing so, researchers hope it will have a broader impact.

“It is essential to identify the obstacles that Latino journalists face daily to generate dialogue within their respective organizations on effective approaches to better train, retain and promote journalists of color,” Maria de los Angeles Flores, who is co-authoring the survey, said in a news release.

Urging Latino journalists to participate, survey co-author Federico Subervi said having Latinos in the nation’s newsrooms is essential to ensuring that the country’s growing Hispanic population is not overlooked by the news media.

There are 57 million Latinos living in America, according to the U.S. Census Bureau. That’s almost 18 percent of the U.S. population.

While announcing the project at the Excellence in Journalism conference on Thursday, NAHJ President Brandon Benavides said he hopes it will help future generations of journalists.

The survey will be available in English and Spanish, and will be open through the end of December 2017. Organizers hope to receive at least 500 responses.

The results will be presented at next year’s NAHJ convention in Miami. 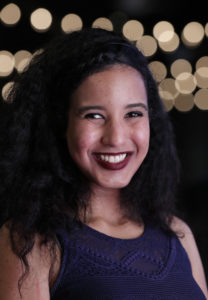 Ala’a Ibrahim loves trash TV, and she’s not shy to admit it.

She especially likes reality shows – The Real Housewives of Dallas is a favorite (partly because she’s from Texas).

Born in Oklahoma and raised in Houston, Ibrahim enjoys visual storytelling so much that she wants to do it professionally one day. She’s studying multimedia journalism at The University of Texas at Austin with hopes of becoming a filmmaker when she graduates.

“I’ve always been interested in telling stories in different forms,” said Ibrahim, who wants to specialize in documentary work. “I just love the creative aspect of reporting.”