Business wear from the waist up may be a trend again next summer.

Board members for the National Association of Hispanic Journalists hinted during the organization’s Annual Membership Meeting on Saturday that next year’s convention might go virtual for a second year in a row.

The 2021 NAHJ conference is scheduled to take place in Miami in July. But the social distancing guidelines spurred by the deadly coronavirus that has continued to spread in the U.S. could mean members will be hearing more of this:

“Sorry, my internet is spotty.”

“I don’t have a lot of confidence come July that we are going to be able to hold a successful convention,” NAHJ Executive Director Alberto B. Mendoza said to members, adding he expects next year may still bring concerns about the spread of coronavirus.

Mendoza said this year’s convention was less expensive for the organization and its members because the cost of food, hotel rooms and flights was taken out of the equation.

During the meeting, which was conducted over Zoom and drew about 40 NAHJ members to attend, Mendoza shared concerns about the state of the journalism industry and how that could impact the viability of company sponsorships. With less ad revenue rolling in amid the economic downturn caused by the pandemic, Mendoza said, media organizations may not be willing to contribute as much as they did in past years.

Journalists have been increasingly laid off and furloughed as companies navigate cuts and hiring freezes. Mendoza said a virtual pandemic is more accessible to journalists who have recently faced similar setbacks.

But virtual conference attendees experienced an array of technical difficulties, including missing conferences, at least one Zoom bombing and audio issues that would not have happened during an in-person conference.

Ana Rocío Álvarez Bríñez said she had trouble connecting with some recruiters on the platform. But she knew going into the virtual convention that there would be hiccups, she said.

Even without meeting people face-to-face, Álvarez Bríñez managed to connect with peers.

She hopes to do the same at the 2021 convention — whether it’s from her desk at home or by the ocean in Miami. Next summer, the Puerto Rico native will have graduated with a master’s from American University and be on the job hunt.

“I would have loved for it to be in person,” she said. “That would mean also that everything would be OK in the world, but it’s not.”

Rebecca Aguilar, a former NAHJ vice president, agrees. She said she’d rather be alive than rush a conference, and journalists are trained to be susceptible to situations like this.

“The pandemic only showed us journalists that we are capable of changing and pushing forward and that nothing stops us,” she said. “Just because we couldn’t see each other face to face, it didn’t mean we couldn’t inspire each other.”

This year’s online reunions have shown Aguilar that the friendships she made through journalism organizations were solid because they transferred over into the virtual world, she said.

“Eventually we will be together,” she said. “I know people want to fly there. They want to be together. But what’s important today is that we’re safe and that we’re healthy.”

Meanwhile, the organization plans to seek input from members on how they’d prefer to meet next year — in person, or through a screen.

April Rubin is a junior at the University of Florida, where she is studying journalism, Latin American studies and anthropology. She recently finished a summer internship at the Miami Herald. At her school’s newspaper, the Independent Florida Alligator, Rubin has worked as a copy editor, a staff writer and university editor. Next academic year, she will be a managing editor. Reach her at aprilmariane@ [at] gmail [dot] com and on Twitter @AprilMRubin.

Julian Berger is a junior at the University of North Carolina studying journalism and Hispanic studies. He works as a part-time reporter for La Noticia, a Spanish-language outlet that covers his hometown of Charlotte, North Carolina. Reach him at julianb [at] live [dot] unc [dot] edu and on Twitter @julianrberger. 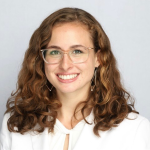