Strong gusts peeled roof tiles off one at a time.

Tree limbs snapped off trees and flew through streets. Reporters braved forceful winds in raincoats and tried to remain standing. Brina Monterroza, a producer at KSAT in San Antonio, spent more than five hours watching these images flicker across large monitors in a dark control booth as Harvey made landfall just as the 10 p.m. primetime shows began.

“It was exhausting,” said Monterozza, the first producer to work the station’s continuous coverage of the storm. “I’ve done breaking news, but being able to find new content, being able to come up with things to show as the hurricane made landfall was hard.”

In the wake of Hurricane Harvey, journalists scrambled to put together a panel a week before the Excellence in Journalism convention held in Anaheim. So they called on convention go-ers fresh from covering the storm in southeast Texas, calling it “Surviving the Storm.”

Two reporters and a news director who covered the aftermath along the Texas coasts gave journalists advice on how to physically and mentally prepare for covering natural disasters.

In her short career, Janel Forte has covered flooding and tropical depressions but Harvey was her first hurricane. Three days after the storm’s first landfall in Texas, the weekend anchor and reporter at WLOX in Biloxi, Miss., drove to Louisiana to await the storm’s second landfall.

“I think knowing my life wasn’t in danger made it easier to cover,” Forte said in an interview.

She didn’t have to leave her hotel to report her first story—Forte interviewed Texans who had fled their homes after the initial devastation caused by flooding, seeking shelter in Louisiana. The evacuees paid for their hotel rooms using FEMA money.

“Your job isn’t to create stories,” said Deven Clarke, a television reporter at KSAT. “It’s to report what’s happening. Let the people who are living the story tell the story.”

Clarke has covered tornadoes, earthquakes and fires but had never stood side by side with hurricane survivors as they described one of the worst days of their lives.

“You have to be able to separate yourself from the story, but be compassionate when telling it,” Clarke said. “It’s hard to see people who have lost a lot, but I was prepared as a reporter.”

The last Sunday he spent in Houston, Nick Valencia, a correspondent for CNN, went back to his hotel room and cried, he said during the panel. He said he suffers with mental health issues as a result of what he’s witnessed on the job.

“I worry for mental health for all of us,” Valencia said. “For all that we do and we see. And it’s something we don’t get to talk about or [we] feel embarrassed to talk about. We all see a slice of our own tragedy when we go out and cover these things.”

Bernice Kearney, a KSAT news director, wants her team to feel comfortable talking to her if they have issues. A reporter at the station once  confided in her about his fears after covering Harvey because it was his first hurricane.

“He was just overwhelmed by how much water there was and how much destruction he saw,” Kearney said, recalling their conversation during the panel. “‘I keep turning around and it’s just nothing but water. I didn’t think it could get that bad.’ And there’s no shame in that. But it is my responsibility, he’s my responsibility.”

She made a point to let the employee know about company services to help him cope.

Rebecca Aguilar, a veteran television reporter who moderated the panel, said Kearney is not like most news directors. She highlighted how Kearney did not limit her gratitude to solely on-air talent but acknowledged every member of the crew. Kearney also made sure the crew wasn’t in the field for more than three days at a time.

“If you’ve got a zombie walking around and they haven’t had a chance to kind of, recharge their batteries, they’re not good to anybody,” Kearney said. “And they are no good to the viewers.”

Sometimes, being human is more important than being a reporter, the panelists agreed.

“I think we’re one good cry from being alright,” Valencia said. 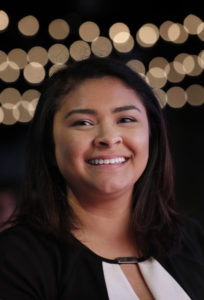 Daniela Ibarra, a digital and broadcast journalism student at the University of North Texas, used to dream of a national career, working at a big network, roving the country.

But after an internship covering news at the local level, Ibarra realized her passion was telling stories about her community.

Ibarra, a native San Antonian, has worked with local station KSAT 12, her university’s news station and interned at Univision. She serves as the interim president for the University of North Texas NAHJ student chapter, but has greater aspirations: to serve on the national board as a student representative.

Among Ibarra’s many adventures, she once witnessed a bomb threat at The Alamo.