The National Association of Hispanic Journalists’ scholarship program led college students to think that the organization would help them pay for tuition. Instead, they were flown to Anaheim.

Brandon Gomez, a graduate student at New York University, said he thought he would be getting tuition money this year because that’s what happened when he received it in 2016. But between then and now, the organization changed its scholarship program. Tuition money is no longer guaranteed.

According to NAHJ’s web site, the new scholarship includes “an alternative” to receiving scholarship dollars: a sponsored trip to the national conference.

It’s unclear how the organization picks which students get tuition money and which get a trip to the convention. NAHJ’s Executive Director Alberto Mendoza declined to comment three times on Friday and Saturday.

“The money does go further when it’s awarded as tuition money,” Gomez said. “I definitely think that it could have been communicated more effectively.”

His professor, Yvonne Latty, said that Gomez didn’t need help paying for the convention. The university would have covered it.

He did, however, need money to pay for his last semester of graduate school.

Gomez and his classmate Cora Cervantes were both awarded NAHJ scholarships last year and had been under the impression that nothing had changed when they reapplied.

Cora Cervantes received $2,000 for tuition this year, but said that the organization should consider setting up two different applications to eliminate confusion.

“Obviously, I went thoroughly through the application,” Cervantes said. “I wasn’t quite sure about it.”

She said she understood the process more clearly than her classmate because she had attended a mixer where the process was explained by NAHJ representatives. Gomez didn’t attend because he had class.

Cervantes said she applied for the program because she felt her chances of getting aid from NAHJ were high — and because she believes strongly in the organization’s mission. Both students said they were grateful for any help they could get from NAHJ.

But they hope that the group will clarify its updated application and scholarship process.

“It makes it really tricky,” Cervantes said. “Maybe other schools don’t offer funding and this is, like, a make-or-break type of thing.” 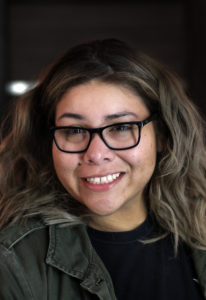