Members of  the National Association of Hispanic Journalists on Saturday questioned board members about the organization’s finances and called on leaders to quit fighting over a controversial merger with another journalism group during an annual meeting that attracted several dozen journalists concerned about the future of the association.

NAHJ released a statement on Wednesday about its decision to conduct a 30-day review of a proposed partnership with the California Chicano News Media Association. The decision led to days of controversy.

Saturday’s meeting was the first chance NAHJ members had to ask leaders about what lies ahead for the embattled partnership.

NAHJ President Brandon Benavides defended the review, saying that the journalism organization needs time to balance its checkbook — including paying back monies taken out of the scholarship fund — before entering into a potentially costly merger with CCNMA.

But former NAHJ president Hugo Balta questioned the wisdom of that decision, saying that the benefits of the merger would far outweigh the costs. Investing in a merger with CCNMA, he said, would help NAHJ grow because the organizations could share sponsorship dollars and provide greater networking opportunities for members.

The meeting quickly devolved into a series of demands from members for more information about how the organization’s money was spent in the last year.

“My employer is not paying for me to be here,” said Joe Ruiz, NAHJ’s online national vice president.

Ed O’Keefe, the organization’s national vice president for print, added that the board follows a strict budget and board members share hotel rooms in order to help keep costs down.

O’Keefe echoed the sentiment of several other board members who think the NAHJ-CCNMA partnership would be mutually beneficial, but said the organization has an obligation to examine the financial and legal implications of the deal on behalf of its members.

“We’re all Latinos. We’re all journalists. We all want to thrive in our careers,” said Luz Villareal, former president of CCNMA. “So let’s not be crabs about it.”

NAHJ must decide by by Oct. 6 whether or not to go through with the merger. 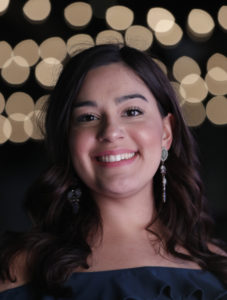 Ever since she was a little girl, Chelsea Moreno knew she wanted to be a storyteller.

Born in El Paso, Texas, she grew up speaking and writing in Spanish and English, skills she hopes will advance her career.

A senior at the University of Texas at Austin, Moreno is majoring in journalism with a minor in Latino media studies. Moreno has served as the news director at Texas Student Television, where her specialties are writing, editing, and making graphics.

When she’s not chasing stories and producing shows, she’s at church. God and family are very important for her, and she tries to visit her hometown as often as possible.

She hopes that participating in the Student Projects will give her a chance to learn from those who have been in the business for years.

In the future, she sees herself as TV producer.