They walked the Anaheim Marriott’s broad halls with smiles on their faces, determined to meet with recruiters who could guide them toward the American dream.

Yet as some students and professionals mingled with peers at the Excellence in Journalism conference, their stomachs churned with fear about the future of their legal status in the country.

A day before the journalists gathered in Anaheim, the Justice Department announced President Trump’s decision to end the Deferred Action for Childhood Arrivals program, known more commonly as DACA. Children brought to the United States by their parents at a young age relied on the program for work permits, driver’s licenses, and access to college.

Under Trump’s decision, the Department of Homeland Security is no longer accepting new applications. Renewals for DACA are accepted until Oct. 5 if permits expire between September 5, 2017 and March 5, 2018. Permits will not be terminated and no one will be deported within the next six months, according to the U.S. Citizenship and Immigration Services.

Moreno, a student at the University of Texas at Arlington, feels confused and uncertain about the future. If Congress doesn’t keep the DACA program from dissolving, then she and others are at greater risk of deportation because they emerged from the shadows to qualify for it.

“They know our address. They know who we are,” she said. “We are on the map.”

Although her fear was palpable, conference attendee Yunuen Bonaparte said she’s grateful for the support of the National Association of Hispanic Journalists. Bonaparte, a photographer and graduate from California State University, Fullerton, said the group’s board of directors reached out to express concern for her.

Knowing her DACA protection would expire in August 2017, Bonaparte began preparing for the consequences. Since last year, she has managed to build a network of lawyers, NAHJ members, photo communication professionals, and journalists to guide her.

Brenda Villa, a student, is the only child out of three from her family born in Mexico. She moved to the United States when she was 2. At 8, she learned she was in the country illegally.

“I remember going to restaurants and being very cautious,” said Villa, who is also a DACA recipient. “I would be like, ‘Oh my gosh, who is looking at me?’”

Listen to Villa’s story about how it is growing up undocumented.

On her way to work, she would walk by the Colton police station and look away, fearful that if she stared at the building she would be arrested and deported.

But she persisted and eventually enrolled at Chaffey Community College, where she had to take ten buses every day of the week to get to school and work.

It’s been hard for DACA recipients lately to ignore the barrage of news about the program’s potentially bleak future.

“My brain is a scatter,” Bonaparte said. “This is psychological torture.”

“I’m not going to leave without a fight,” she said. “I know that I have the resources to do that.” 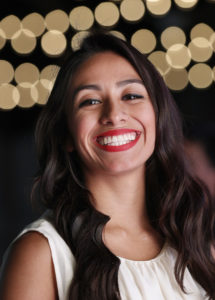 She’s from Los Angeles, and her family is from Mexico. Posadas has professional experience with Telemundo and is involved with Latino clubs and organizations.

She is looking for internship opportunities in the English-language market, because she wants to know what it’s like to work in both English and Spanish. After graduation, she would like to eventually find a job with a company that promotes diversity and inclusion.

For now, Posadas would like to work with an entertainment company in either digital or television platforms. Posadas is hoping to learn more about the newest trends in the industry at the Excellence in Journalism conference. She considers herself tenacious and hardworking.

“Every no takes me closer to a yes,” she said.