SAN FRANCISCO — A week before the COVID-19 outbreak was classified as a pandemic and California Gov. Gavin Newsom (D) ordered all non-essential businesses to close on March 16, 2020, Latino Reporter staff writer Adriana Morga Oregel began a photography project about restaurant workers. Four months later, during what seemed to be a second wave of the shutdowns meant to stem the spread of the deadly coronavirus, Morga Oregel interviewed some of the same restaurant workers and asked how they were weathering the ongoing pandemic.

It was through a text from his manager that Irvin Caamal found out on March 15 that his restaurant was going to temporarily shut down due to the COVID-19 pandemic. Caamal, originally from the Mexican state of Yucatán, came to the United States when he was just 16 years old. He has worked in Gialina, an Italian restaurant in Glen Park, for five years. He had heard about COVID-19 in the news and some of his friends had told him they were out of work due to the recent outbreak, but it wasn’t until Newsom officially announced that all non-essential businesses had to close that things began to feel real.

On Sunday, his day off, Caamal received a group text from his manager telling him and his co-workers that Gialina’s owner decided to close for some time.

The owner of the restaurant managed to give the workers some financial help through donations. They were minimal compared to their actual salary.

“I wasn’t as affected at the beginning,” said Caamal, who shares an apartment with his brother and cousins in San Francisco. “We got some donation money from the customers and it helped. But I started to feel it more during the second month without work.”

Abel Morfin, the general manager at Gialina, is originally from the Tijuana/San Diego area. In an interview in March, he said in the more than a decade that he has worked in the restaurant, he had only taken two sick days and was always busy with the management. But just a week after that conversation, Morfin, like all of the workers in the restaurant and thousands of people in California, had to stay home.

“We didn’t have to close,” said Morfin. “We mostly did it to make sure everyone was safe and we got prepared to come back safely.”

Before the pandemic, Gialina’s small tables sat close to each other in a cozy configuration. Now, with tables pushed to the side, staff use the dining space to store some of the extra materials they need to prepare to-go orders.

Their hours are reduced. They used to close at 10 p.m. and now do so at 8:30 p.m. They also take orders over the phone and online.

Many things have changed during the COVID-19 pandemic. The economy is not the same and there is an overall uncertainty when it comes to the future. And Morfin has noticed that people are starting to change their behavior towards them.

“People have been more grateful towards restaurant workers,” said Morfin. “Restaurant workers are the invisibles, not many people see who is working in the kitchen and they think ‘oh they are happy just because they have a job’ but the workers have their own problems too.”

But the problems become even bigger for undocumented immigrants, who are not able to file for unemployment or get a stimulus check.

According to the Public Policy Institute of California, the state is home for more than two million undocumented immigrants, and around 78 percent of them are from Latin America. In the middle of May, the California government opened the Coronavirus Disaster Relief Assistance for Immigrants (DRAI), which aimed to provide financial support to undocumented immigrants in the state. Though the program received a lot of criticism for not having the bandwidth to respond to  the sheer number of people trying to apply, the stipend made a difference for those who managed to get through the long wait times over the phone.

One of those people is Manuel Lopez, the main cook at Gialina who used DRAI to help his family get through the almost three months he could not work. Lopez has two children,  a son soon entering into middle school and a daughter soon entering high school. With bills and rent to pay, Lopez and his wife tried to get as much help as they could get while he waited for the restaurant to reopen in some capacity. They also applied to local non-profit organizations and went to food banks in the Mission District. Still, the family felt the financial and emotional impact deeply.

“It affects you psychologically to be inside all the time,” said Lopez. “I was fine but my daughter took it very hard, she graduated and was very sad that she was not going to see her friends and teachers again.”

Gialina stayed closed for two and a half months, leaving most of the workers to rely on their savings. Caamal lived off his savings and began sending less money to his dad back in México. Lopez used the money he saved for his daughter’s 15th birthday party, to pay the rent for those three months.

“You never know what can happen, I wasn’t ready for this,” said Caamal. “I had savings for an emergency but not for this, it has been four months and it is too much time really.”

For others, the wait to get their job back is still not over. Noel Ulloa used to work at Rigolo, a French restaurant in Presidio Heights, but was furloughed at the beginning of the pandemic and is still waiting to go back to his job. Originally from Honduras, Ulloa has been without work since mid-March. He plans to wait until the pandemic ends so he can get his job back or, if that’s not possible, look for a new job. In the restaurant, he used to do a little bit of everything, but what he misses most is how well he got along with his co-workers, the majority of whom are Central American.

Ulloa is living off his savings and trying to stay in his house as much as possible, except when he goes for a jog in the afternoons. Arriving in the United States as  a teenager, Ulloa dreams of returning to Honduras, where all of his family lives and where he would like to continue his life. For now, he lives with another Honduran family who he says “feels almost like my family.”

Those who have kept their jobs through the pandemic have had to step up for members in their family who have lost work. Such is the case of Jose Miguel Montoya, 28, a migrant from Honduras who works as a cook in Rigolo. While he was able to keep his job in the restaurant due to his seniority, he lost hours and pay while  supporting his three sisters and two nephews, all of whom have lost their jobs due to the coronavirus.

Such is the case of Jose Miguel Montoya, a migrant from Honduras who works as a cook in Rigolo. While he was able to keep his job in the restaurant due to his seniority, his pay was and hours decreased and now he has to support his three sisters, and two nephews, who have lost their jobs due to the coronavirus.

“Because all of my sisters lost their jobs,” said Montoya. “I have to pay rents, phone bills, food, everything. It’s been hard.”

One of Montoya’s sisters used to work in a restaurant and the other two worked in supermarkets in the city. They all used to take care of their own expenses, even when he shared an apartment with his twin sisters. Now, in his free time, he takes charge of running errands for his family members.

According to Montoya, Rigolo’s sales went down 70 percent, leaving workers uncertain about the future of the restaurant.Rigolo’s owner prioritized workers who had families and seniority, and Montoya was one of just four workers that stayed. Though he kept a job, he lost almost half of his salary.

The stories of San Francisco restaurant workers  are part of a larger trend that shows how Latinos in the United States have been heavily affected by the COVID-19 pandemic. According to the Pew Research Center, Hispanics are more likely to have had a pay cut or lose their job during the coronavirus pandemic, with around 49 percent of Latino households declaring that someone in their family has experienced loss of pay or work. Beside the economic impact, the Latino community has also presented a disproportionate number of COVID-19 cases, as Latino people are 4 times more likely than white people according to the CDC.

Despite these conditions, Montoya maintained a positive attitude. “It has been a bit hard, we are hoping that this ends soon, but we are good overall,” said Montoya.

Adriana Morga is a senior at San Francisco State University, where she has studied photojournalism, political science and international relations. She has interned with Al Día, the Spanish language sister publication of the Dallas Morning News, and an on-call digital producer with KQED, an NPR member station in San Francisco. In the fall, she’ll serve as city news editor for San Francisco State University’s student newspaper, Golden Gate Xpress. Reach her at adrianamorgao [at] gmail [dot] com and on Twitter @adrianamorgao. 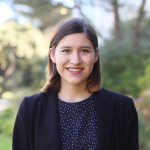