PHILADELPHIA – The face of newsroom leadership at some of the industry’s biggest companies has changed dramatically over this past year in a wave of diversification that some journalists hope will lead to more inclusive news coverage.

After a year filled with intense conversations around race and representation, fueled, in part, by the national protests against racial injustice and the marked inequalities that the coronavirus pandemic revealed, newsrooms began to reconfigure their coverage and organizations – especially, their leaders.

Industry watchdogs applauded the changes as a good first step, but warned that it can’t be the only step newsrooms take or no real change will occur.

Newspapers followed suit. The Los Angeles Times announced in May that Kevin Merida would take over as its executive director, becoming the second Black editor and third person of color to hold this position at the newspaper. The Washington Post later that month named Sally Buzbee, the former executive editor of the Associated Press, to lead the newsroom, making her the first woman in history to take on that role.

While many of these appointments made history, experts said, they may not be enough to change the culture and coverage of news organizations.

“We know that one person alone cannot change systems,” said Martin Reynolds, co-executive director of external affairs and funding of the Maynard Institute for Journalism Education. “News organizations, we know, have been systemically racist and perpetuated white supremacy culture. It doesn’t mean that people in the organizations themselves are racist, but there’s been an ambient of racism that has existed in news organizations for generations.”

The Latino Reporter sought comment from MSNBC, CBS News and Thomson Reuters but did not receive a response. When asked for an interview, a representative from the L.A. Times instead shared articles and press releases about Merida’s hire.

Notably absent from these hires are Latino journalists, who have instead made strides at regional news outlets.

In the midst of national protests following the police killing of George Floyd, a Black man in Minneapolis, the Philadelphia Inquirer published a news story under the headline “Buildings Matter, Too,” about the impact of protests on the city’s infrastructure.

The headline, widely criticized as an insensitive play on the protest rallying cry “Black Lives Matter,” prompted many staff members to call out of work in protest. Days later, the top editor, Stan Wischnowski, stepped down.

In November, Gabriel Escobar – a Colombian raised in Queens, New York – was named the Philadelphia Inquirer’s first Latino editor and became the first person of color to hold that position.

The San Antonio Express-News announced on June 11 that Nora López would take on the newspaper’s top job as executive news director. López became the first Latina to run the Express-News in a city that is 64% Hispanic, according to the U.S. Census.

“It's definitely been a breakthrough year in terms of the number of journalists of color who have ascended to top leadership roles,” López said. “My concern is that this not be just because we're in this period of racial reckoning. My hope is that we can sustain this and that in three, five years from now, this isn't a news story, this is just business as usual.”

Experts who study the journalism industry said outside pressures, including protests and other news events, can push news organizations to grow their diversity and be more open about their internal demographics with their staff and with the public.

News organizations like The Los Angeles Times, New York Times, National Public Radio, Buzzfeed, The Washington Post and ProPublica have in recent years begun to release annual reports that capture a snapshot of the diversity of their staff.

In a 2020 diversity report, the California Times, the organization that owns the Los Angeles Times and The San Diego Union-Tribune, released data meant to show how the newsrooms of these organizations have diversified in the two years since being acquired by the first people of color to own either paper in more than 150 years, Patrick and Michele Soon-Shiong.

The report showed that 62% of the managers at the L.A. Times identified as white and 38% responded that they were people of color.

When compared to the population of Los Angeles County, the newsroom falls short in its diversity. Hispanic people made up about 49% of the county’s population in 2019, according to U.S. Census Bureau figures, but only 29% of the L.A. Times staff identified as Hispanic.

In a note to their staff earlier this year, according to an article, a spokeswoman said the company wants to increase its percentage of Black and Latino workers by 4.5% by the end of 2025.

López, who is president of the National Association of Hispanic Journalists, pointed to reports like these as evidence that journalists of color need advocacy groups to fight for representation in newsrooms.

“Yes, unfortunately, Latinos are still lagging and that's why organizations such as ours exist – to try to advocate for more Latinos and to try to hold news media corporations accountable for their lack of hiring of Latinos specifically,” López said.

Some leaders in news organizations have recognized the historic impacts of these gaps.

Patrick Soon-Shiong, co-owner of the Los Angeles Times since 2018, acknowledged the biased and racist past of the publication in an opinion piece last December.

“Since it began publication in the early 1880s, The Times has had blind spots. It has ignored large swaths of the city and its diverse population, or covered them in one-dimensional, sometimes racist ways,” Soon-Shiong wrote.

Organizations like NAHJ, the National Association of Black Journalists (NABJ) and the Asian American Journalists Association (AAJA), among others, help to elevate journalists of color who may not have otherwise come to the attention of hiring managers, said Kathy Chaney the vice president for print of NABJ.

“Black journalists have always been kept out of mainstream newsrooms,” she said. “That's the reason why the Black press was founded and it's been advocating for our newsrooms to be more racially diverse for our communities to be covered, and not just in crime stories.”

This is not the first time newsrooms have attempted to diversify en masse.

These promotions did not solve sexism in the journalism industry, she added.

“They did a lot for American newsrooms, but we've discovered through the #MeToo movement, that they weren't able to change everything about American newsrooms that made them difficult places for women to work,” she said.

She went on: “If Kevin Merida, doesn't succeed at diversifying the audience and the staff of the Los Angeles Times so that it completely reflects the community of Southern California, I'm not going to blame all of that on Kevin Merida.” McBride said.“There's so many forces, including the guy who owns the paper, the business climate, the local economy, the political climate.”

McBride and Reynolds said that it is going to take more than just one person – or a wave of new leaders – to truly change the culture and coverage of American newsrooms. McBride pointed to other areas where journalists can improve, including by diversifying sources used in coverage.

“They need to attract more diverse audiences, which means creating content with a variety of different communities in mind, instead of presuming that all content that is created (and) printed predominantly by white people will serve all communities,” McBride said.

Editor’s note: This story has been updated with 2021 data that reflects the demographics at ProPublica. 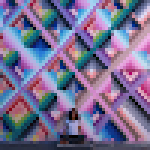