Cheyenne Darcy Amaya refuses to say she got to where she is today alone.

She points to a large cast of mentors, teachers, friends, family and supporters who helped her rise from pursuing a master’s degree at at Boston University to an internship at MSNBC’s The Rachel Maddow Show and now as a producer with Don Lemon Tonight on CNN.

At each step of the way, Darcy Amaya said, she can point to at least one person who helped her up to the next level. In college, in graduate school, at her first internship and now at her job.

Just a few years into her career, Darcy Amaya, 25, is already making plans to be that person for the next generation — the one in the room advocating for more diverse voices.

At CNN’s Don Lemon Tonight, where Darcy Amaya books guests, manages pre-interviews, and pitches stories daily, she said she wants to help people traditionally shut out of national platforms to feel like their experiences matter.

“It’s important to have [Latino and Black journalists] in the newsroom because if we’re not there, then you’re shutting out an entire voice,” Darcy Amaya said.

She grew up in New York, watching news reporters work all around her: At the New Year’s Eve celebrations in Times Square, at the annual fireworks show for the Fourth of July, around town as crews from the local News 12 crew set up shots and filmed stand ups in Westchester County.

“I just kept looking up there as inspiration,” she said. “But, I didn’t see a lot of diversity in [television] news.”

This lack of representation led to a bout with imposter syndrome, as Darcy Amaya sought her master’s degree in Boston, she said. But a professor, Michelle Johnson — a longtime mentor and leader of the National Association of Hispanic Journalists student projects — encouraged her to apply to join the newsroom of the Latino Reporter.

Being a student reporter for the project during the 2019 NAHJ convention in San Antonio introduced her to a staff of volunteer mentors who reminded her that spaces for Latino journalists exist and there are many people who want her to succeed.

Darcy Amaya said she never wanted to step on someone else to arrive at the position she is in today. Young journalists need to find someone who believes in them to help them get where they want to be, she said.

Three years after her first internship, she’s helping pave the way for more Latinos and journalists of color in production to ensure diverse experiences are included in the Don Lemon newscast.

Darcy Amaya added young journalists need to find someone who believes in them to help them get there.

“I don’t think you should push people down to make it up,” she said. “When you make it to the top, you have to send the elevator down.”

Anna Guaracao is a graduate student at Boston University studying journalism. She has a bachelor’s degree in communication and sociology. She is an intern for CNN’s The Row, which is the network’s editorial gatekeeper and fact checking unit. She is pursuing a career in news production. Reach her at  aguaraca [at] bu [dot] edu and on Twitter @yosoyannaa 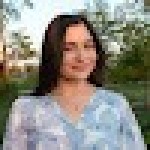